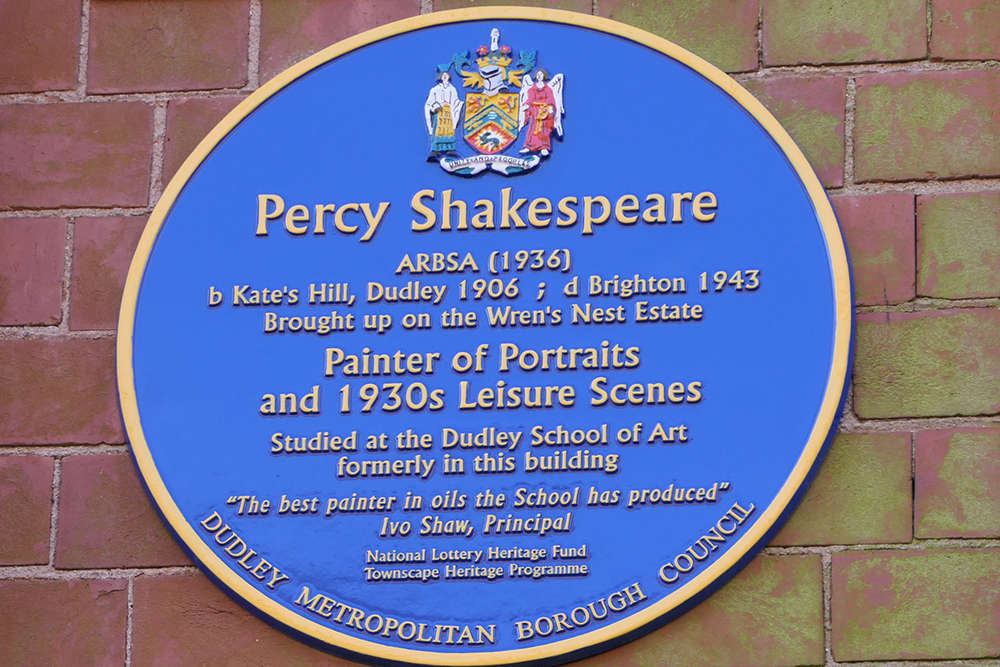 A historic blue plaque to remember Dudley-born Percy Shakespeare has been unveiled by the Mayor of Dudley in recognition of his contribution to art.

The plaque was unveiled on Wednesday in St James’s Road on the facade of the former Dudley Museum and former Dudley School of Art where Percy Shakespeare was a student in the 1920s.

Born in 1906, Percy was an immensely talented locally born artist from Kates Hill. He is famous for his flowing but precise figure drawing technique, his powerful portraits and a series of pictures depicting 1930s leisure activities, such as tennis, bathing, boating, cricket, an afternoon at the Ice rink and most famously, a visit to the Tropical Bird House at Dudley Zoo.

"The Blue Plaque is a fabulous way to recognise Percy Shakespeare’s talent and keep his memory alive. The council has a number of his paintings in our collection and we are really lucky to have these.

"His artwork is outstanding and it will be a privilege to unveil the plaque to commemorate him and his work."

The Mayor was joined at the unveiling by Ivo Shaw’s son, Robin Shaw, who wrote Percy's biography of Shakespeare. Sadly, the life of Percy Shakespeare was cut short in May 1943: whilst serving at a Naval base, he was out in the open air, when bombs were dropped from a plane near Marine Gate, Brighton. Robin added:

"My father, Ivo, always thought Percy Shakespeare was the most talented student he had had in a long career in art. In 1922, when he was principal of Dudley Art school, he discovered Percy, a small boy from the slums loitering in the art gallery.

"He gave him paper and pencil only to be astonished at Percy’s natural talent. My father would be delighted he is being remembered with a blue plaque."

The plaque has been funded by The National Lottery Heritage Fund and Dudley Council through the Dudley Townscape Heritage programme.

Dudley Museum at the Archives is hosting free, short talks about some of Percy’s paintings on Monday 28 February, which would have been his birthday.

Places need to be pre-booked either by calling 01384 812750 or booking online through ticketing service Eventbrite and can be found by searching the site for Dudley Museum and Percy Shakespeare.